Promised to cruel King Nøkkyn’s harem, Sol Eriksen is out of options, and nearly out of time.
When she meets a distractingly handsome stranger in the Ironwood Forest who claims to be a legendary monster, Sol thinks he must be a madman, or a demon. She knows she shouldn’t listen to him. Or trust him. And she should not, under any circumstances, kiss him again.
As King Nøkkyn’s grip around her tightens, Sol finds her last chance at freedom may lie with her mysterious new lover, the man who calls himself Fenris. 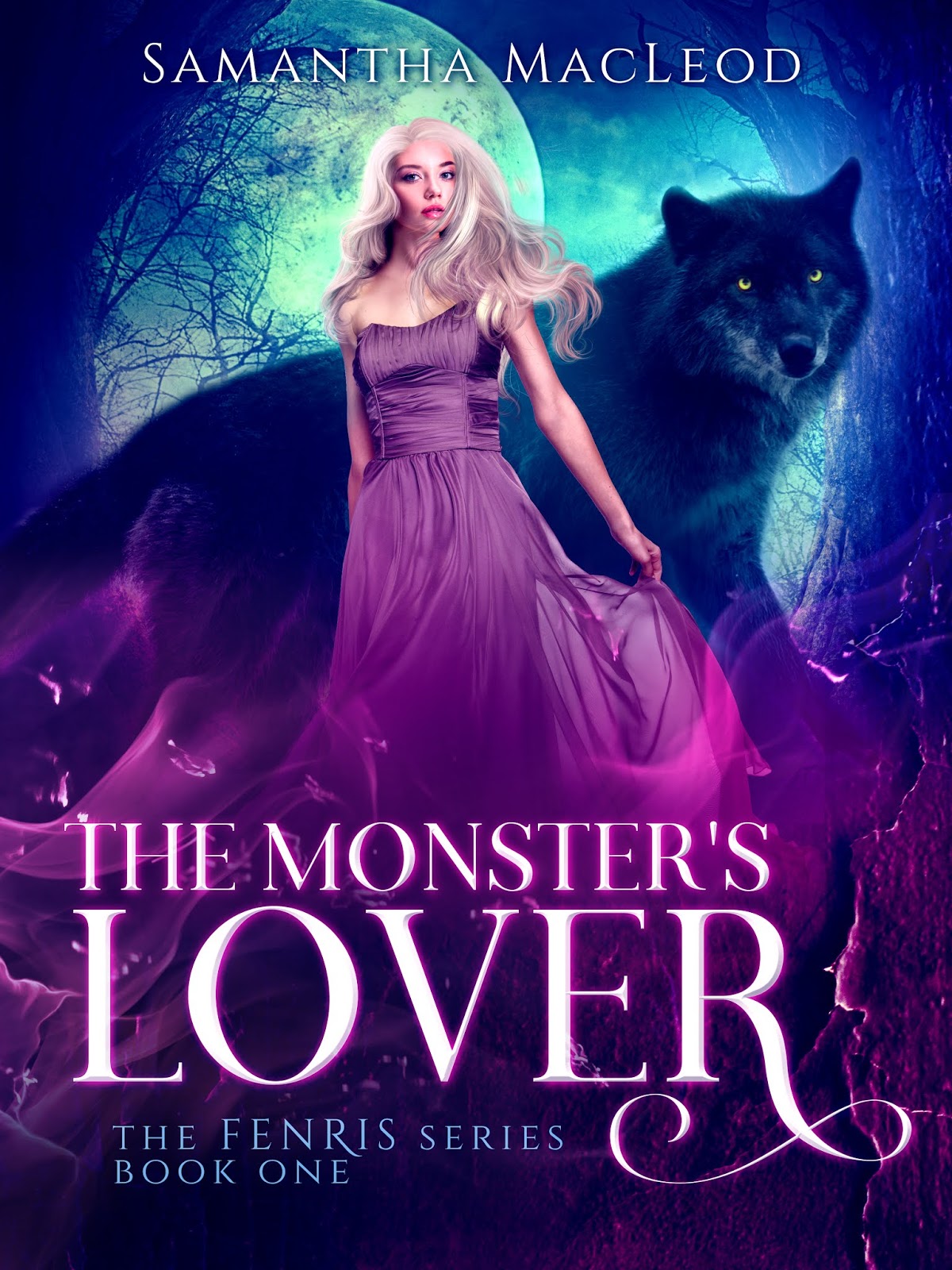 “Ms. Macleod thank you so much for your intense interest in mythology and storytelling. Each story you write is like a dream.” – Amy, Goodreads

“A passionate romance, characteristic of Mrs. MacLeod, that brings with it a love of legend and a light of hope to face an uncertain and dark destiny.” – Adriana, Goodreads

“The Monster’s Lover kept me glued to my kindle. It was so good! From the mythology to the romance to the feeling of freedom and love, I couldn’t put this book down!” – Julia Red Hatter Book Blog

I closed my eyes, tilted my face toward the fading sunlight, and ran my fingers through my wet hair, carefully avoiding the sore lump on the back of my skull. The fear and shame of the day slowly melted from my body, evaporating in the thick evening light. I was safe under the trees, just like Da always said.
I can scarcely explain what made me turn.
There were no strange noises, nothing out of the ordinary. The river hissed and murmured. Birds cried from the canopy while the wind whispered to the treetops. Shadows pooled beneath the pines’ thick trunks, and the evening insects began their songs.
Still, something silent and invisible thickened the air, raising the hairs on the back of my neck. I opened my eyes and turned away from the Lucky, toward the deep forest.
He stood a pace away from me, beneath the trees. Not hiding, but not exactly visible. He was so motionless, he may as well have been made of wood himself. My heart jumped, and I grabbed a river-smooth stone in my fist before coming to my feet. If he tried to throw mud at me, I’d smash that stone into his skull.
His pale eyes blinked, and he tilted his head to the side as if trying to understand what he was seeing. My breath caught in my throat. He wore no shirt; black curls of hair scattered across the rippling muscles of his chest. His bare skin reminded me of my own nakedness, and my cheeks warmed.
“Who are you?” I demanded.
He frowned, then tilted his head to the other side.
“Are you from the village?” I asked. My voice trembled slightly as I tightened my fingers around the cool rock pressed to my palm. I’d never seen him before, but that meant little. Town people moved around like seeds on the wind.
“No.” His voice sounded odd, as though he were unused to speaking. “I am not from the village.”
My fingers relaxed around the smooth stone from the riverbank. He wasn’t one of the boys from the village, come to further torment me. Thank the stars. I glanced down at my stained, wet dress spread over the grass, then at my own exposed body. I’d never been naked in front of a stranger before. King Nøkkyn most certainly would not approve. The thought sent an unexpected ripple of heat through my core.
“I’m not decent,” I said, wrapping an arm around my breasts and cupping my free hand over the curls between my legs.
His gaze dropped, as though he were just now noticing I was completely naked. He watched me for a long time, his eyes widening as they traveled down my arms, over my legs, and along the bare contours of my hips. My skin warmed as he watched me, almost as though he were running his elegant fingers across my body, chasing away the cold of the Lucky’s waters.
“You’re quite beautiful,” he said at last when his light eyes returned to my face.
Beautiful. How many times had I heard that? Ever since I was a child, I’d been dogged by that word. I’d grown to hate it.
But, coming from his soft, full lips, the word brought me pleasure. Beautiful. It was unreasonable, but I was glad to hear he found me beautiful. My lips started to curve, and I turned away, embarrassed to have the stranger see me smile.
“Excuse me,” I said.
I bent toward the grass and let the rock slip from my fingers when I grabbed my dress. It was still wet, but I pushed it to my chest anyway, making sure the damp, stained cloth covered my breasts before I stood again.
He’d moved. The stranger was one step closer to me. I blinked, trying not to stare at the way his muscles curved and arched toward his hips. He was totally naked, and I had to force myself to tear my eyes away before they could linger between his legs.
Was he mad? Was this a demon from the fiery depths of Múspell?
He was certainly handsome enough to be a demon, with his pale eyes and high cheekbones. His hair spread over his shoulders, a dark amber like the last flash of life in a dying fire. A tiny green twig twisted in the strands. Something unexpected tightened deep inside me as the silence between us stretched taut.
Perhaps he was trying to lure me toward him, so he could grab me around the waist and drag me back to Múspell. I watched him through narrowed eyes, wondering about Múspell. How would his demon fires compare to the cold stone of King Nøkkyn’s fortress?
I’d never seen the fortress of Nøkkyn the Mountain King, of course, but everything I’d ever heard about it was frightening. Some of it was downright terrifying, like the stories of rotting heads on iron spikes lining the gates. Even the head of his first wife, if the rumors were true. Could life with the demons of Múspell possibly be any worse?
If this strange madman dragged me away, I’d look at those bright blue eyes every day, those full lips and high cheekbones, that thick, auburn hair swirling around his temples. My heart thrummed against my breastbone so loudly, I worried he’d hear it.
“What do you want?” My voice wavered like sunlight across the water. 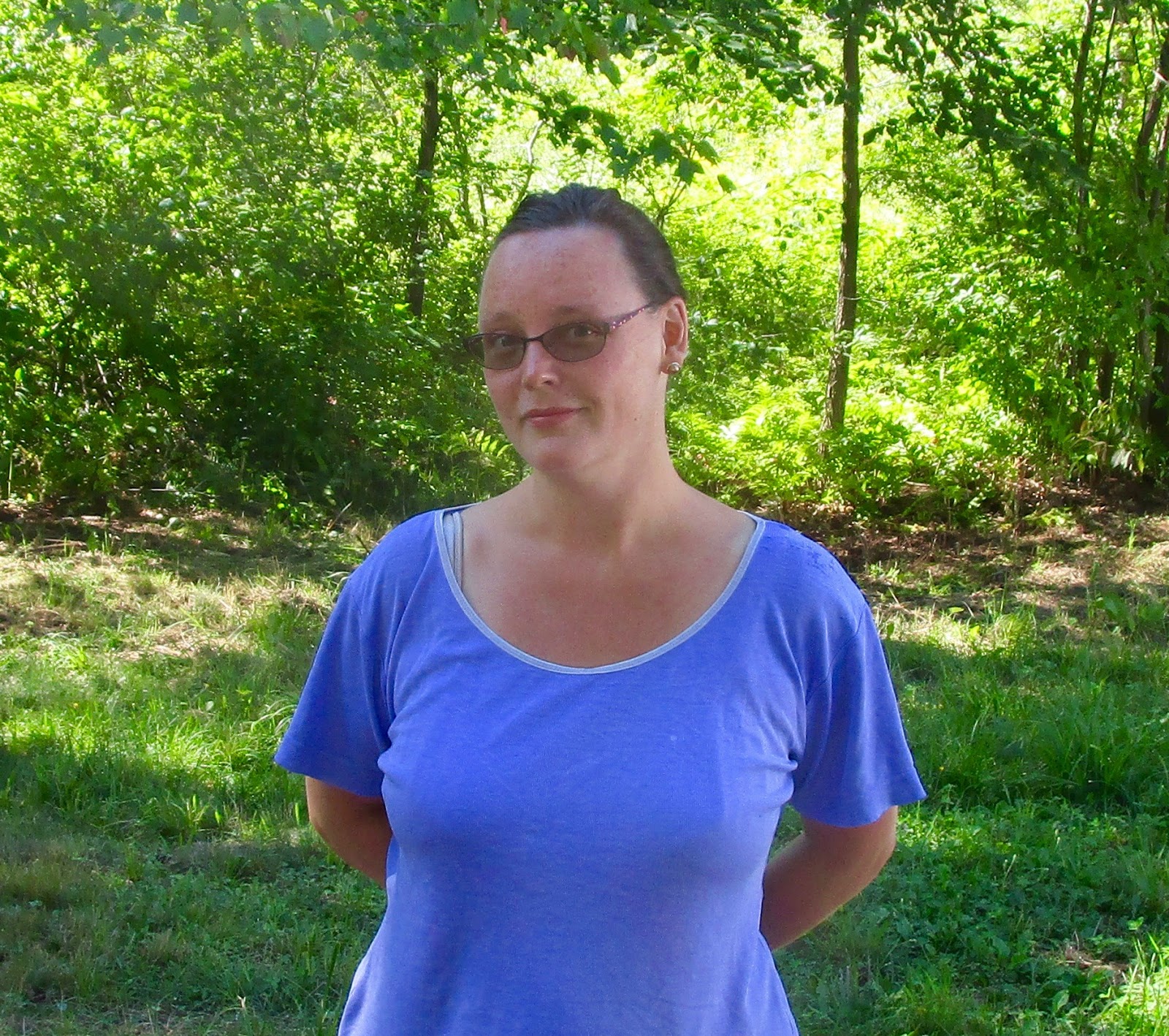 Born and raised in Colorado, Samantha MacLeod has lived in every time zone in the US, and London. She has a bachelor’s degree from Colby College and an M.A. from the University of Chicago; yes, the U. of C. really is where fun comes to die.
Samantha lives with her husband and two small children in the woods of southern Maine. When she’s not shoveling snow or writing steamy sex scenes, Samantha can be found teaching college composition and philosophy to undergraduates who have no idea she leads a double life as an erotica author.