A badass biker and the sexy little sprite that wants nothing to do with him.
They’re opposites in every way that matters—except one—they can’t keep their eyes off each other.

Hammer watches Tink strut past him without so much as a glance. His eyes moving over her hot little body—a body that’s been driving him crazy and keeping him awake at night. She’s the one chick he’s been infatuated with for months, but she won’t give him the time of day.
Hammer just doesn’t get it. After all, he’s a big, muscular man who turns female heads wherever he goes. Tattoos cover the skin of his sculpted body, and that combined with being a patched member of the Evil Dead MC does it for most women who are into bad boys. Not Tink, though. Unfortunately for Hammer, the one woman he wants more than any other seems to be immune to him.
Well, he’s had about enough of her snubbing him like he doesn’t even exist. He’s going after what he wants, and what he wants more than anything is that hot little girl with the short white-blonde hair. The one so petite, the guys in the club nicknamed her Tinker Bell.
Yes, that sexy little sprite is going to be his.

Tink is totally aware of Hammer’s eyes on her as she walks past. Warmth floods her body, like it does every time she’s near him and he looks at her that way—like he’s undressing her with his eyes and imagining all the sordid things he’d like to do to her. Things she lies awake at night imagining as well.
But Tink isn’t willing to risk her heart; not for a man who could hurt her like he could, a man who has already been with her sister. Raven always gets what she wants, and that’s usually anything she thinks Tink might want.
Tink learned long ago not to even try to compete with her sister. It’s pointless. So, she’s carved out a life for herself surrounded by the men of this MC and the women who have become her best friends. It’s a world she thought her sister would never be interested in, and one where she’ll never have to compete with her.
Apparently, she’d thought wrong.

What happens when a badass biker wants the one woman he can’t have?
How far will he go to have her?

About Nicole James
Nicole James is a USA Today and Wall Street Journal bestselling author who loves writing about hot alpha men who’ll do anything for the women they love! Her stories are filled with struggle, conflict and real human emotion. She is the author of the Evil Dead MC series, the Brothers Ink Tattoo series and more. 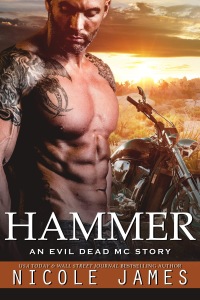 For fans of Nicole James, Hammer will not disappoint! Nicole did an incredible job of bringing her readers another hot alpha biker, who’s badass but loves hard too.

Hammer’s a member of the Alabama chapter so you know what that means, right? SHADES and GHOST!!!!!!!!!

Okay ~ let me tell you … as much as this is Hammer’s story and believe me, he is all that and more, I was floored by EVERY SINGLE LINE—narrative or dialogue that was written for SHADES.

He’s the chapter’s VP (from Book Three in the series), and our boy, Shades, is take-charge-don’t-mess-with-what-I-say-kicka$$-soon-to-be-prez (well, in my opinion)! I’ve fallen madly in love with him all over again. Ghost will knock the readers on their butts just from the banter and laughter he instigates between the club members—he and Shades are just the best!

Now … to Hammer. He is put in a position no one wants to be in, especially a biker who lives his life doing as he pleases. But he’s a man, a real man, who takes a family tragedy and turns it into the best, most selfless situation. These guys always step up to the plate and that’s what I love most about them. They do what needs to be done—no matter what.

Tink has always been a part of the Evil Dead clubhouse. She’s not a club girl or a hang-around but rather a friend to both the guys and  ‘ol ladies in the clubhouse. Although she’s very young, Tink turns out to have a decent head on her shoulders. She’s sassy and driven, but she’s also held back somewhat by her aggressively jealous sister, Raven, who really does a number on Tink’s self-esteem and social life.

Hammer and Tink love each other and probably always have, but Hammer just has to … well, Hammer that into her head a bit!

This book is another great addition to the Evil Dead MC series. I love the brotherhood and the loyalty to the club. There’s nothing better—and no-one does it better than Nicole James ~ five stars for me ~

Check out all of Nicole James’ Evil Dead series ~

👉🏻Check out Nicole’s web page, where you’ll be able to find her Evil Dead merchandise and sign up for Nicole’s mailing list! This way, you’ll never miss out on the latest news😎 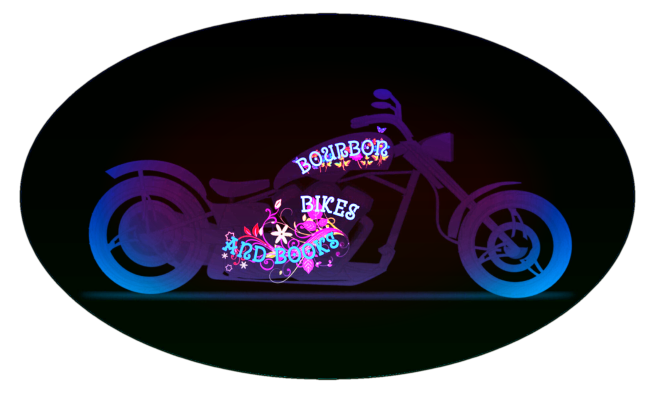